Understanding the Theory of Structuralism in Literature – Analysis and Link

The world has gone beyond metaphors. We can feel and live the realities that we imagined ages ago. "It's live!" Centuries ago, it could have any other meaning, but something live on television was far from reality. Today, nevertheless, it has changed completely. Something is live means someone is live through various mediums like TV, phone, social media or computer. How did the meanings of words change? Or, the words are the same, but our perception changed. 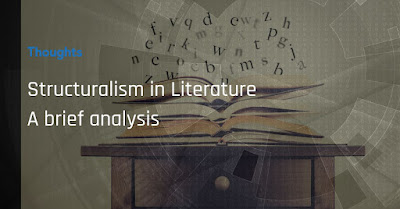 Structuralism as a literary theory depends more on the analyses of linguistic patterns. How it changes over time, and how the corpus of words forms. Structuralists do many things that are beyond text. On the contrary, Deconstruction focuses on the text itself. One looks for unity and patterns, and another traces the loopholes and fragments. It sounds odd.

Literature originates in the society we live. And therefore, marks of social achievements of the time must reflect in the works produced. Trains were new in Victorian England. Dickens wrote about them in his novels. Labours were not leading dignified life when Blake wrote. We can see glimpses of their agony in many of Blake's poems. In Indian English literature, R K Narayan and Mulk Raj Anand, Raja Rao and Tagore, Aurobindo, Naidu and many others reflect the realities of their time in various literary works.

Coming to the concern of Structuralism, many theorists of the school believe that words have deeper meanings than what appears on the surface. Ganga is our Mother. This sentence, for an Indian, carries more than just a relationship symbol. However, for someone unfamiliar with the significance of the river Ganges for Indians, this sentence might not even suggest a river. Avram Noam Chomsky, unlike Saussure, puts the onus of interpreting the messages embedded in words on the readers. He offered the idea of competence and performance to describe the available knowledge and one's ability to indulge.

The major problem with the theory of Structuralism is its objectivity which is too objective to be able to judge the quality of a literary work. If you don't indulge with the text for what it conveys, you can seldom reach a conclusion. Yes, if we consider Structuralism an act of analysing the text rather than interpreting it, we can be happy with the text being ignored and its patterns being explored. Which is, to me, a farce!

To know more about this topic, you can read an outstanding article on English Literature website here: Structuralism Theory in Literature

All the best! Hope you get what you are looking for!