Gautam Rajrishi – the face of changing trends in Hindi-Urdu shayari

Many readers have emerged as staunch fans of contemporary shayari being written in Hindi and Urdu. Many of these books are produced by the contemporary figures in Hindi and Urdu literature who take writing as their best option to express their emotions, expressions, and feelings. Thoughts do come and find space on the pages but is certainly secondary to the emotions and aspects fo emotions. With the publication of Neela-Neela, Gautam Rajrishi has certainly risen to the pedestal which is higher than before. He has become popular among the youths and young readers who enjoy Shayari as a good medium to spend time. In this piece, I will try to put for the the best of his features. 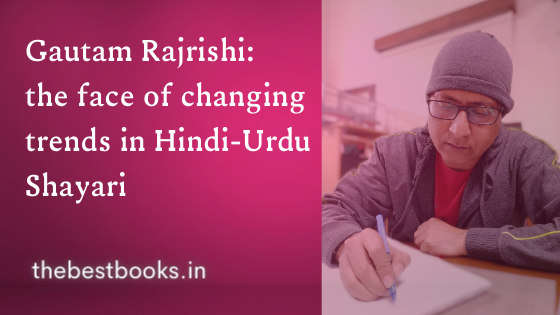 With a stance like this, the verse which can put life in objects like Moon and Night and moonlight, Gautam Rajrishi has the capacity to lure his readers into a world of his own where anything can breathe and anything can become stationary. This is common with shayars but with Gautam, this comes naturally and he uses it to the best of his capacity.

One more thing is to be noted that Gautam does not put a step back when it comes to use the words which are not commonly found in shayari. Nokia, charger, car, window, coffee, sms and so on... He tries to make his verse as local as possible and this certainly works in connecting his thoughts with the readers and keeping him at the closest possible position of the readers' imagination and thoughts.

In Neela-Neela, Gautam's qualities as a shayar of love, emotions of love and confessions, helplessness and hopes of a lover or the beloved has come up with its full brightness. Many shayaris, it seems, are dedicated to his leisure that he enjoys patrolling the Indian borders because the shayar is active as an office in the Indian army! You can also notice a few glimpses of his duties peeping out from the verse on a few pages in his latest collection Neela-Neela.

To sum it up, Gautam Rajrishi has adopted a style that makes him truly contemporary. However, he does not break away from the traditional approach. He just makes his own tunnel on the same road that leads to emotional appeal in the shayaris. He will woo the beloved and would talk to the moon the same way as other traditional shayars do. However, his words and the style of conversation is changed... changed to suit the lifestyle of modern readers who will ultimately read his verse.

You can read Neela-Neela to know more and also enjoy some of his wonderful poetry. All the best!

By Jitesh for The Best Books