Feminism and Indian Literature – right from the beginning

India has been lucky enough to witness some of the greatest works of literature. Mahabharat, Ramayan, Bhagwad Gita, Puran, Upnishad and what not... when we talk about classical Sanskrit literature and our glorious past. When we come down to poetry and other genres, we have Jayadev, Vidyapati, Kalidas, Tulsidas and many others to represent our great heritage in producing some of the masterpieces of literature that have absolutely no parallels... anywhere in the world. However, when it comes to feminism, representation of women in Indian literature and a fair share to women in our literature, there have been the 'revolutionists' who fail to acknowledge the great respect, space and adulation that our literary creators have ascribed to the Indian women.

Before those modern-born and hyper-feminists jump to criticise this article by citing 'blah blah blah Ram left Sita...' 'Howl howl howl but but Radha wasn't married to Krishna any way...' 'Huh huh heh hah! Draupadi this Draupadi that and so on...' Modern authors with feminist glasses on their eyes have indulged themselves in rewriting those old and forever masterpieces according to their political, ideological and mental biases and it has only ruined the scriptures' original form rather than enhancing them. So, what is the case that I am making? What am I talking about? Are there any examples in our literature that can substantiate whatever I am going to write or have written already? There are.

Do you remember the story of Satyavan and Savitri? Yes, a lady who stood up against the very law of the universe, the param satya or the universal truth. She did not only stand up and confront Yamraj but also won her husband's pran (life) back from the Hindu God of death. What was it? What does it represent? What does it show? A woman standing up even against the very law of nature...

If you remember the story of Ramayana and Mahabharat well, you will remember that most of the women in those days used to be married to the guy of their choice and they even had the right to reject anyone – Draupadi and Karna episode bears that testimony so well. We all remember that Sita was denied a comfortable life with Ram because of murmurs by the pupil pf Ayodhya. However, why do the feminists at large forget that Sita was brave enough to raise her children and also taught them, educated them and groomed them to be the future kings... and, at last, when the moment of reconciliation came, she decided to embrace death rather than accepting a life of people's grace... Sita was FEMINISM in person. She does not need modern certificates. She had the option of choosing to stay with her parents in Mithila but she decided to accompany her husband so that she can fulfil her Patni-dharam... well, modern feminists think that drinking alcohol in public, dancing semi-nude in Bollywood movies and competing blindly against men are the perfect signs of feminism... this is not!

We have Devis – the very essence of the world according to Hindu mythology, the Adi Shakti, is none but a Goddess, a woman... we easily forget that. We have Shiva and we have Uma, Parvati. We have Indra and we have Shachi. We have Vishnu and we have Lakshami. We have Brahma, the creator, and we have Saraswati... we have more Goddesses than Gods. And still, our modern feminists think they need to twist facts and facets of our great heritage and rewrite those books of history so that they can do justice with the great women that we worship and respect... that's nothing but a confusion en masse.

Reading a biography is a fascinating thing. In most of the cases, it will allow you to understand the life of someones with a third person view. Meaning that you will be able to know about a person by someone else and that intends to be objective, authentic and a true value assessment. There are some writers who are known for their skills at writing biographies. Romain Rolland, James Boswell,  Walter Isaacson are some famous names among this group. They present the real picture of their subject's life, events, interest and their creation in a detailed manner. Writing a biography is a really tough task because you can not go out of limited boundaries. The lives of great personalities are like an open book and an intelligent person knows about it. Today, the point of discussion is Steve Jobs' biography. 'Steve Jobs' written by  Walter Isaacson is the best seller book. The author and person in concern are world-famous personalities. 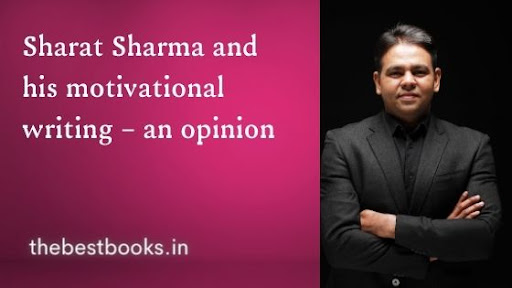 With the rise in the numbers of self-help books published every year, one can expect that there is a flood of motivational books in the market and you cannot choose, very easily, which one should be your next companion for a few days. Yes, it happens and it has happened with me as well. However, I look for a few things that help me choose whether a book is within my sphere of requirements or not. And this is why I have chosen and read the bestselling motivational book by Sharat Sharma recently – The One Invisible Code.