It has not been very long since I finished reading this tremendous novel by Indian novelist Lakshmi Raj Sharma who rather finds himself settled somewhere between the popular fiction writers in contemporary Indian English literature and traditional writers who have either stopped producing literature or produce too little to be noticed and make any impact upon the scene which is, sadly, spreading itself even faster than the current corona pandemic. The Tailor's Needle by Lakshmi Raj Sharma is a novel which finds its opening and conclusion in the India which was not free because it did not have government of her own but Indians who were free to decide what they had to do with freedom movement going outside home and battle of intellects going inside. 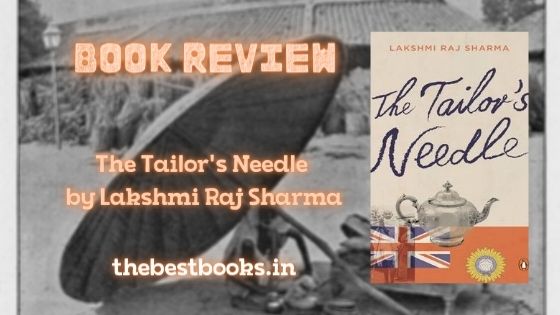 The novel tells the story of a prime minister to a prince of Mirzapur who has to leave his job once the king dies and leave the city as well. Sir Saraswati Chandra is an Indian who has more etiquettes than a British when it comes to make fun of the Britishers and more Indianness than anyone else when it comes to that. However, there is a life-long conflict within his own mind and he cannot decide what should be the best, in terms of education, for his children. Maneka, Yogendra and Sita turn out to be very different people and perhaps beyond the expectations of their father, Sir Saraswati.

The novel is having many themes at the same time and we cannot say one thing at the cost of another. The novel is a social novel, a historical novel, a coming of age novel, a perspective novel, a psychological novel, an Indian freedom struggle novel and also a crime thriller to an extent. It has been tightly bolted with the elements of various specifications that make a novel one of the above-mentioned specialities (and more than one and perhaps all at times). So, choosing a theme for certain might be a tough task to complete.

On the part of its content, the novel has many special qualities which are worth mentioning here. It has a beautiful but simple language that goes beyond the limits of modern contemporary novelists in India. The plot is subtle, serious and also flexible enough to accommodate readers of various interest lines and you can read it from any perspective you want. You can even venture beyond the traditional lines and read The Tailor's Needle from a feministic perspective if you like because Maneka's character offers you that vividly. So, the novel is hybrid and you will realise that going into the depth of it.

To end this book review, I will tell the readers that I really enjoyed reading the novel by Lakshmi Raj Sharma and I would tell the readers to go through it at least once. You will surely find it worthy of your time. All the best! You can buy the novel from Amazon India by clicking the link below:

Review by a reader for The Best Books