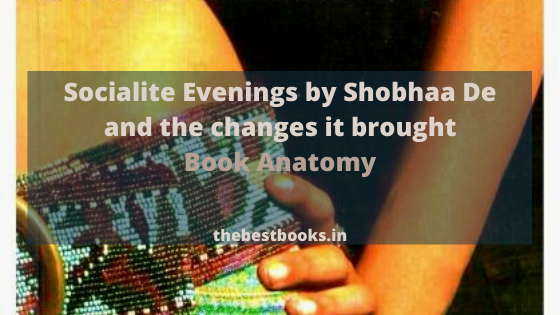 The day is not ripe to talk about the novels written by modern authors who are mostly young and dynamic in their thoughts. However, we can certainly discuss the root cause that changed the very gene of Indian English fiction, initiated in the year 1989 by none other than 'wonderful' novelist Shobhaa De, who brought the elements in Indian literature that were, though, needed but could be delayed for sure. However, why delay what we need? Shobhaa De may be taken for granted as a butt of satire for many critics in India but her novels do appeal to a large section of readers (really?) and we cannot discount that.

Socialite Evening was a novel published by Penguins in 1989 and written by famous Indian novelist Mrs De who brought much essential and very much-needed elements of change in Indian English novels at that time. It was, somewhere in the oblivion, limited to exploring the higher truths of spirituality and the serious elements of social fabrics in Indian culture. However, no novelist dared to venture beyond the well-defined periphery of Indian fiction. Themes, plot, storyline, characters – almost everything that we can identify with novel writing could be changed but no one, still, dared to go down the roots and explore sexuality, desires, bitter truths and frustration that we as a society were having in the rapidly changing century. Shobhaa did this with her very debut publication.

Socialite Evenings portrayed an image of Indian rich society with the heavy-earning husbands and their sexually deprived wives who could not think of anything other than cheating on their husbands and look for alternatives to enjoy their bodies. Karuna, who is a deprived and even divorced wife, uses her body to reach the social status or height she wanted to achieve and also enjoys her life with 'good sex' that she wanted for long. Though the novel portrayed truths but it presented them in a way that the 'civil society' in India could not digest at that point of time. However, the undertone appreciation was very much visible among the book lovers.

Today, almost 32 years later, the question that we should ask ourselves is why and how did Penguin publish this novel at that point of time knowing very well that it may backfire and the novel could be outrightly rejected by the readers? Did Penguin just want to subvert the course of Indian English literature? We might need to think about it but the reality, as of the day, is that Indian English novel has been touching the bottoms already and we seldom find anything that can go beyond the periphery Shobhaa set with her Socialite Evenings back then... was it deliberate?

You can decide for yourself how do you see it. However, I am very clear that the change was necessary but, at the same time, an overflow of change wasn't essential and it was forcefully injected in the veins of Indian English writing and we have almost spoiled the better sense of our English literature, in terms of novels, especially, today. We do need reality but that needs to be compensated with the better wisdom that should be there to guide us to the truth as well.