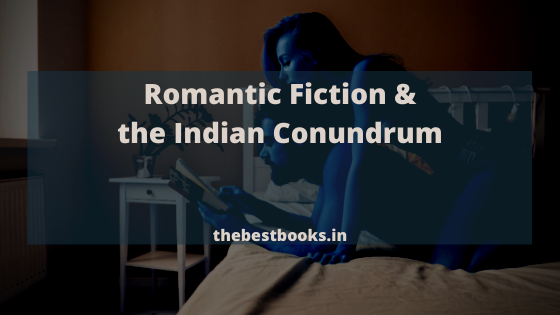 Romantic fiction writing in India is at its pick and no author in the writing industry wants to let go of this opportunity. This is, speaking candidly, a cash cow. Who will let it waste? Who won't want to squeeze this honey-hive to the last drop? Where did it begin? There might be heated debate which won't reach any conclusion. Some readers might name Chetan Bhagat and others may claim that Ravinder Singh did it. However, deep down, at the bottom, we all know that it was Chetan who began the idea of middle-class fiction, to a great extent. Ravinder Singh certainly introduced the readers to the idea of middle-class romantic fiction. Introducing Indian readers to sleazy, cheap romance and show of nakedness was the job self-ascribed to Shobha De and she did it wonderfully in the novels she wrote. Today, where do we stand?

It seems that the idea of romantic fiction and the raw demand of it has taken over the entire Indian English literature. Readers, mostly young, have kept themselves aloof from the idea of literary fiction and they indulge mostly in 'consuming' literature that is produced majorly for commercial gains. Though there are authors who take a different path and produce very good quality of literary works in crime, thriller and other genres (anything other than sleazy romance). However, the volume is so low that it cannot compare with the production of romantic fiction on a massive scale.

There are authors like Sudeep Nagarkar and Nikita Singh, Durjoy Datta and a few others who write romantic novels just with the genre as camouflage but the reality inside is very different. It is more like a romance concerned more with the flesh rather than the notions of romance that begins, develops and concludes. On the other hand, there are certainly the authors like Preeti Shenoy and Chetan Bhagat who try to add a few extra dimensions to their works other than the usual ingredient of romance. Though this practice is noble and their idea is certainly progressive, there is a lot to cover in terms of reaching the level in Indian literature that can lend us a respectable place on world literary forums when it comes to prestigious literary awards and accolades. Can you find any contemporary romance writer who has won a few or even one literary award of repute? You may end up banging your head against the wall but you won't find any. This is, sadly, surprising in a regressive manner.

I appeal to all the Indian Authors who are indulged in the trade of words to produce some serious pieces of Indian English literature that can take us forward in terms of approach and innovation that could not only add something new to the literary horizon but also appeal to the readers some positive things that they can do in order to create a better society for tomorrow. Because literature has a bigger responsibility on its shoulders other than being a source of entertainment! Dear novelists, please do something about it.

By Abhishek for The Best Books
Literature Opinions