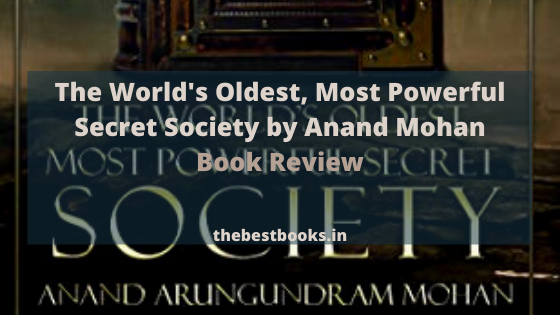 Anand Arungundram Mohan's debut work, The World's Oldest, Most Powerful Secret Society is a 2020 novel and also one among the works that I really enjoyed this month. While I would like to recommend this novel for the lovers of adventure, fantasy and young adult literature genre outrightly, let me get into a few details so that the readers can have a comprehensive idea about this work of fiction. The novelist has also hinted for a sequel by living the conclusion open to new explorations. This is further exciting as I would certainly be a person waiting for a new instalment that would contain the adventures of 9 kids who can fly, walk in the air and pull off tricks at the drop of their hats...

The novel employs a very wonderful premise to set the tone for the events to unfold and flourish. Anand proposes that Ashoka, the great Indian king, decided to say goodbye to his armours and wars after the Kalinga battle. He, moreover, also formed a secret society with 9 men who were ordered to gather the most precious and most advanced knowledge in the world and collect all that they discover in a book, Book of Power. This angle has been highlighted by many leading and top book bloggers in India and some of them have also compared the past-seed for the present suspense technique of Anand with that of Ashwin Sanghi, the famous author.

When the novel opens in the present time, in Hyderabad, the readers are introduced to a very strange event – 9 children are born on the same day and their parents live in the same building, in different homes. Surprised, I moved ahead and the novel kept rolling rather slowly to its main event. With basic introductions of the children, the storyline develops and the kids grow to become teenagers. However, after the sudden and unfortunate death of one of them, Gopal, the storyline intensifies and the readers would find many interesting things as the novel moves ahead.

The central motif in the novel is getting a dead friend back and the guys in the group, remaining 8 after one dies, try to locate and grab the Book of Power, yes, the same book that Ashoka's men hid somewhere. Where? Can the children get access to that book?

Just to inform the readers about what they might be expecting in the book, the Book of Power has the secrets that can help people in making time travel possible, making chariots fly, making anti-gravity possible, opening new dimensions to engage in warfare and many more scientific, spiritual and religious secrets that can unfold an all-new vista of knowledge. And therefore, the most interesting thing that the readers should ask is what will the kids do when they get access to such a book with so many powerful, innovative and wonderful ideas?

The novel is more than interesting and the author has made things just right. Though there might be the occasions when the writer has let his narrative go beyond the ideal margins, this is an interesting adventure and fantasy fiction for all the readers. You can know more about the book and read the readers' review on Amazon or Goodreads. All the best if you plan to read, which you should, The World's Oldest, Most Powerful Secret Society.