The Girl in the Dream by Pravin Agarwal - Book Review 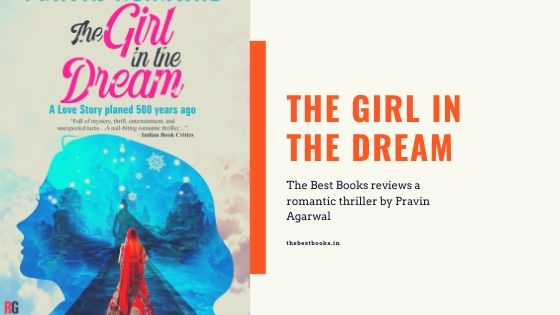 Pravin Agarwal's debut work, The Girl in the Dream, is subtitled with a very evocative collection or words - a love story planned 500 years ago. So, it might suggest to the readers who are too interested that the novel may take them into the past and try to link the things there to the present scenario. All those who might have thought so (after having a look at the novel) are right. The novel does exactly the same thing - taking the readers into the past; however, there is more to it than it may seem from the distance. Pravin Agarwal has planned and penned his debut fiction book in a way that it does not let the readers get an entire idea of what comes in the very next chapter of the chapter being read. So, there is the element of suspense and also the element of surprise. In short, it's a moving novel and the readers will never feel underwhelmed.

The novel opens with a dream and dream remains the central idea of the plot until the central characters, Vivaan and Riya, reach India from the USA. Vivaan is a well-established scientist with NASA and his beloved Riya is also a well-settled creative designer with a reputed firm in the USA. They also come from well-to-do families and have been raised in the USA. However, the fulcrum of the plot takes place in India and the author has planned their journey to India very effectively and nothing reads like a forced twist. The dream, the girl of the dream, the temple from the dream and the way these things connect with Vivaan and Riya and also two other characters, Rachit and Swara (who remain in India largely except when Rachit visits the USA) are amazingly designed and will surely compel the readers to think.
It is a romantic novel, to put in simple words. However, there is much added to a simple romantic tale of the marriage of Vivaan and Riya. Introduction of Rachit in the USA and then the introduction of Swara in India are also very effective. Introduction to the ancient temple of Lord Shiva and then the exposition of the major interest of the plot - the dream that confuses Vivaan continuously - have been written with due care and decoration. And this is the reason that Pravin's novel is becoming very popular among contemporary fiction readers and reviews by readers, frequently visited Indian book review site and general audience has been superb.
Further support to the attraction in the novel comes from the simple language and an engaging narrative. However, at times, the novelist has gone too deep into the psyche of his characters and the monologues and hidden thoughts' expressions have come out very differently. It may be interesting for many readers. To sum up, The Girl in the Dream is a novel that will certainly create an impact upon the readers. It will give out a message that romantic writing without short-term explicit obscenity is very much possible if the author wants to achieve it. I would recommend this novel for its subtle storytelling and an engaging and exciting plot that keeps the readers glued to the novel throughout!

Buy the novel - click here to buy from Amazon India

review by Chandan for The Best Books
Book Reviews Literature