I am offering an alternative - Ravi Dabral 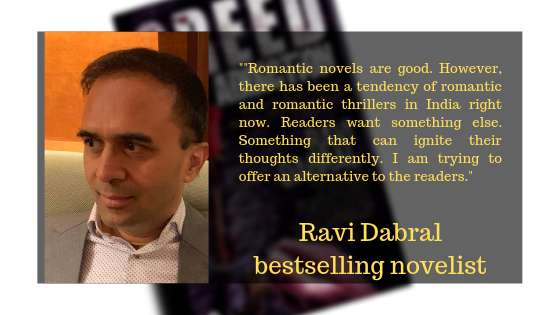 "Sensation is good in fiction. Creating a sensation in abundance, however, doesn't reflect a well-planned fiction. If you are writing a novel, you have to make sure there is more than only one certain thing that you offer your readers."

Ravi Dabral, the author of a debut bestseller, Greed Lust and Addiction, said this when he was asked about his motivation for writing fiction. Ravi's debut novel offers a complex set-up to the readers. The protagonist Suraj is a round character who changes with time. In fact, as a reader, anyone can easily see that Suraj's character has different aspects and his personality gradually opens up in front of readers in the course of the novel. There are other characters like Vijay and Guru Ji who represent certain sections of people. There are also evil characters who represent modern society laden with negativity and ill-intentions.

Greed Lust Addiction keeps the readers alert. It offers spiritual anecdotes as well as a crime thriller experience in the first part that the readers will cherish. It also offers a psychological insight into the character study of modern society and its people. Guru Ji, the spiritual leader in the novel, changes people who come in his circle and the change is for good only. Suraj comes into his contact and he forgets his personal vengeance spirit and rather works for the betterment of society. And this is what Ravi Dabral, one of the best crime thriller novelists in India right now, means when he says that a novel has to offer more than one certain element to the readers.

"Romantic novels are good. However, there has been a tendency of romantic and romantic thrillers in India right now. Readers want something else. Something that can ignite their thoughts differently. I am trying to offer an alternative to the readers."

Ravi Dabral revealed this when asked about his plans for the future. He is working on his second novel but doesn't deny another part of his debut work Greed Lust Addiction. He plans to take the scene of his novel from India to a global level. Readers are anticipating for his next novel as well. His debut book has performed well in the eyes of top Indian book critics as well. You can easily find his book with well-received reviews at top book review websites in India.

His first novel did very well among the readers. Still selling in good numbers online and offline, the novel has more than 500 reviews on Amazon and readers are most satisfied with a changed narrative and a different theme that contrasts two lives - carefree and personal, and responsible and sensible. You can buy the novel by Ravi from Amazon India here:

Buy the novel - click here to buy from Amazon

feature by Vikash for The Best Books