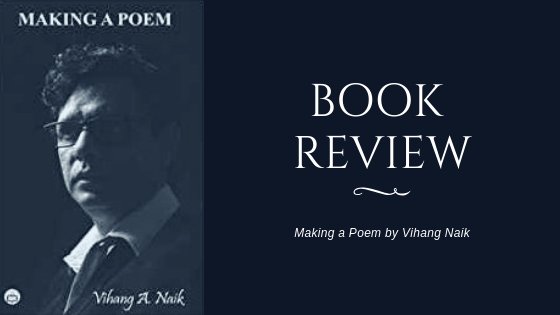 Vihang's collection of poems, Making a Poem, has been republished by AuthorsPress and it was originally published a few years ago. In this collection, the poet has included 25 of his poems. Out of the poems included, most are short in length and deep in meaning.

"You discharge feelings,
your loose emotions

and flush them to make
clear a poem of words,"

These 25 poems, which are divided into five different sections, are mostly discussing the poet's plight, the art of writing poems, the limitations of human beings and humanity and also about the personal issues (rarely).

The poems included in the collection beautifully depict the progress of a poet. Vihang tries to emphasise that a poet is made very early but his practices are quite different at the beginning - 17 is the age of writing love poems while a poet in his thirties will certainly try to write serious poetry most often. However, he does not tell us what a poet will do in his sixties...

While I largely hold these poems to be the masterpieces of the art of writing poetry, I will not say these are just the perfect ones to please every kind of readers. Some of these poems are complicated and cannot be understood by the common readers.

Well, if I leave my sympathy for the casual readers of poetry aside, the collection by Vihang becomes too fertile. He writes:

and this is what makes someone a poet... and I find it quite a truth already! Unless someone decides to sail against the tide of his or her emotions, it's difficult to be a poet of matter and not of vague emotions. Vihang Naik has shown us how to become a poet of matter with his poems with a deep layer of meanings and many possible interpretations.

Making a Poem is a collection to go for... this is a collection of poems which you must read if you remember reading poetry not for fun merely but also for an understanding of life.

Review by Saurabh for The Best Books
Book Reviews