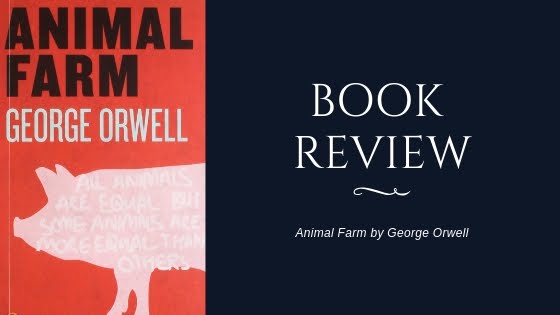 I am seldom a fan of callous novels. The novels of even poems for that matter which lack juice of humour and soul-pleasing stuff, I rarely read those. Exceptions are the pieces of fiction written by Beckett. Well, I am writing today about the piece of fiction, Animal Farm, written by George Orwell. Orwell's piece lauds the need to loudly appeal and also warns the readers about blindly following any leader without verifying the potential consequences that may fall on their way in the future. Here is my 'abstract review' of Animal Farm only for the readers who might have heard about the book or may have leisurely read it as well.
There comes a leader who claims to avenge for you. He promises to get you out of the mess. You support him. He rides on the wave of support and sends out the current leaders. Becomes the king. For a few days, things look like independence... the fragrance of self-determination and freedom in the truest sense. After a few days, however, things become the same and you are left with nothing. The rules keep changing to suit the needs of the leaders and the subjects are suffering.

Animal Farm is a novel that can be enjoyed by the children of early years as well as by the veterans of the grave years. It can certainly be interpreted in various ways by the youths who enjoy decoding metaphors and analogies. What I find the best-embedded in the novel is its pure craft and the skills of the author, Orwell, to say this and mean that - or doing the double-talk.

Napolean means something. And so does mean his desire to walk on two feet and act just as the 'previous regime' implying that the relationship between a leader and his subjects can seldom be original - it has to be copied or it just has to be modelled on the same caricature. However, it certainly depends on the want or desires of the leader.

To conclude, Animal Farm is as humorous as a comedy and as serious as a tragedy - for a better analogy - by Shakespeare. This is certainly unmissable and you have to read it again! All the best.

review by Saroja for The Best Books