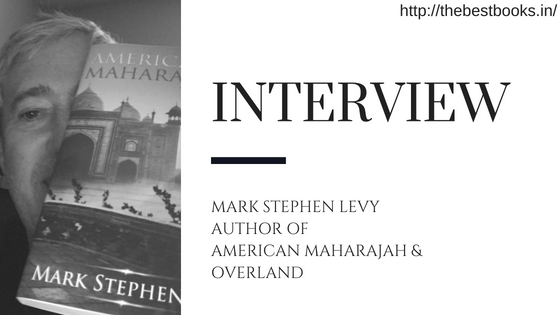 Dear Readers, we present an interview with the American author Mark Stephen Levy who has recently published his second novel, set in India, American Maharajah. His novel has been liked and appreciated by the Indian readers for its connection to the Indian subconscious. In one of this Author Interviews, Mark talks about his book, his writing and also his future plans.

TBB Q1: Let’s start with congratulations for your quality fiction, Mark! It was really a good experience reading your book and as many readers have pointed out, it was indeed mature and wholesome. When you look back, what do you think of American Maharajah now?

Mark Stephen Levy: Thank you for the congos! I really like this story and not because I wrote it. It’s the kind of story, if I ever picked up a book to read, this would be the one. I think it is a timeless story, and if it isn’t widely discovered now, it will be going forward, at some point.

TBB Q2: What about the mythological part, Mark? Where did you get to know about the ancient story in which the spring just disappears from the village after the reincarnation of the king’s son?

Mark Stephen Levy: Good question! I didn’t know anything about this part. It was some spark of imagination I thought would fit into the storyline and on lined research for any kind of validation.

TBB Q3: You have been siding with the simplicity in your novel; many readers have pointed out and even we have appreciated that. However, do you think novels as plain as yours will continue to appeal the readers?

Mark Stephen Levy: I surely hope so. It is interesting that in my first book, Overland, I used many ’10 cent college words’ which many readers said they didn’t like, and some had to stop reading to get the definition of a keyword. I think simple is best as long as the story flows and it is interesting.

TBB Q4: You have mentioned many details about popular Indian places in your novel which are mostly the tourist destinations. Do let us ask you whether Sushil, the guide to Ravi, is a tourist himself? He lesser seems a driver and a philosopher more!

Mark Stephen Levy: Sushil is. And he is someone I met in Ladakh for real, who managed the hotel in Leh where I stayed for a week. He too lived in Delhi and was just in Leh for tourist season. And was philosophical. We had many some fun nights in Leh and then saw him again in Delhi down the line, just as in American Maharajah.

Mark Stephen Levy: My plans are now writing the third book, based on Tibetan refugees. My country’s response, not so much. There are two reviews on Amazon US and over 20 on Amazon India. India and Nepal are my target audience.

TBB Q6: On the artistic side, we would like to know more about your vision on the craft of the novel. What kind of novel, you think, appeals the readers? What are the necessary elements, according to you, which should be embedded in a fiction?

Mark Stephen Levy: The kind of novels readers like is subjective to the readers themselves. Not everyone would like my genre I write about an adventure coming of age love stories. Although a popular genre, there are many other categories out there.

The necessary elements are the ARC of the story itself, with a beginning, middle and end. That simple!

TBB Q7: Not all, but most of the writers are readers as well. Who are the contemporary authors in the USA who, you think, represent the true spirit of US literature?

Mark Stephen Levy: Not to be funny, or silly, but I have no idea.

TBB Q8: And at last, do let our readers know if anything about your upcoming works is there that you would like to share. All the very best for your travelling and writing, Mark!

Mark Stephen Levy: Just that this story about Tibetan refugees came to me on my recent trip to Nepal, and I plan to have this book completed and ready to go by this year's end and stay tuned!