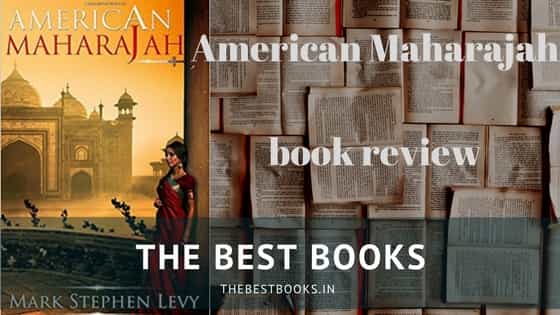 American Maharajah is a novel by Mark Levy which has been published in India for the Indian audience this year when 2018 was in its baby-clothes. Talked by many and appreciated by many, the novel is being praised for the Indianness and its quality story. However, my reading has also brought out several other things. I won't be able to share all with the readers because I don't want to spoil their interest in the book by leaking out central elements in the novel. However, I will surely share what needs to be shared with them.

Search for love or search for the purpose: Without going into the story, let me tell you that the central protagonist in the novel, Ravi Shankar, an Indian brought up in the USA, comes to India on a sheer entertainment trip because he was almost dried with the life in Denver, Colorado. Though he likes India, when he accidentally meets an elderly King and a young lady in Rajasthan, he is drawn to them instantly. Though fate calls him back because his father is suddenly hospitalised, he returns to India - what gets him back just by a letter from Aishani (the beautiful lady who saves his life, when?)?

The Mythology: The novel starts with a prologue which takes us back 'several hundred years ago' and we get to know about a king who lost his son just before he was about to make him the king of the state. However, after many years of the death, prince returns but only with a curse - the spring vanishes from that village in Rajasthan, Bharthambhor.

The modern makeover of the legend: Now, American Maharajah uses this legend cleverly. Mark has given his story a twist - Ravi is mistaken to be Amar, the dead son of Maharajah and the beloved prince of Aishani. Ravi looks like Amar - exactly the same! Even their photos match when Ravi inspects some of them. So, is Ravi the reincarnation just like it happened in the legend several hundred years ago? If yes, will the spring once again vanish leaving the people to die in the desert?

Read this wonderful piece of fiction as Ravi tries to explore the secrets he had not been told by his parents. He inquires about his birth and he gets shocked to know the reality...

Critical Aspects:
The novel is written in simple language and readers can read it rather fast. The plot is also speedy and it does not stop or lags like some of the novels do. The theme of the novel is wide open for possible explorations by the critics. I could find my explanation for it which I will post after some months.

You can get the copy of this book by Mark from Amazon India link below: