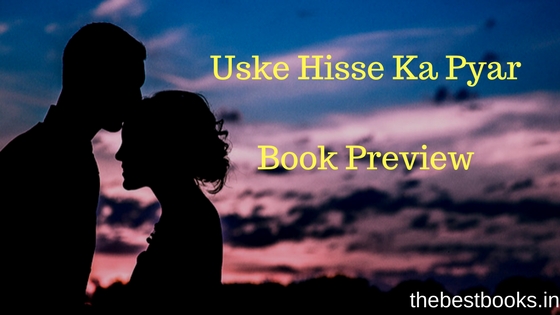 Uske Hisse Ka Pyar is an upcoming book by short story writer Ashish Dalal - this will be his debut book as well. A collection of short stories based on love, friendship and relationship, Uske Hisse Ka Pyar is written in Hindi and the pre-release read of the book suggests that it has got the appeal to attract more and more readers. Ashish Dalal is not entirely new to the world of Hindi Literature as he has been writing constantly for various Hindi magazines and newspapers. He has been penning short stories and poems at times too. It's now that he has decided to enter the world of writing officially and he has decided to mark his debut with this short story collection.

You can guess the seriousness of the short stories by Ashish Dalal just by leisurely browsing through the excerpts that we have gathered for you. For example, the following short story is about the dilemma which often lingers upon a person's mind when he falls in love with someone and such a pensive situation arrives:

The son has to choose between his parents and his beloved... and you will find Ashish's story not only interesting but also compelling and intriguing.

He also explores the realms of sensuality within the limits of literature. He has tried his best to portray that attraction which spreads the magic of love on the people indulged in this art and those moments of intimacy also find a good reflection in the short stories featured in Uske Hisse Ka Pyar:

Uske Hisse Ka Pyar will be available for sale on Amazon after the mid-November 2017 and we hope you will find the book interesting as well as serious! We will review the book once the book is well-settled in the market and most of you have read the book so that we don't spoil your reading pleasure...