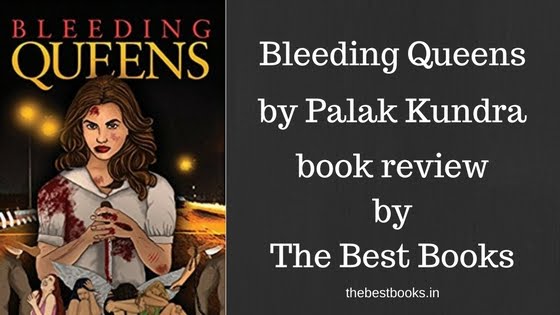 Palak Kundra's debut novel Bleeding Queens is being praised by the readers and the reviewers of literature because it deserves that praise. I got to read this book 3-4 days ago and because the book is written in Hindi, I could easily finish it in a couple of days. The read, no doubt, was simple and very easy to comprehend. I could understand the message which was apparent in the texts and also the message which was hiding behind the text. Palak's narrative was way straightforward and very easy from the perspective of the readers to be understood. She has written about a female protagonist who is the lead character in the novel. Diljit, (the protagonist's name) belongs to a family residing in Delhi. They are basically Punjabi (as the author herself is Punjabi so we could anticipate that the debut will surely reflect some resemblance).

I am certainly not going to offer a shorter version of the entire story here for the readers. The readers who wish to know what happens in the book and the sequence of the events can please read this wonderful review of Bleeding Queens on Featured Books. Basically, this is a novel about a girl, Diljit, who is raped by the criminals of the worst kind and is left mentally and physically devastated. However, she gets on the track by the encouragement of her brother and lover and takes the revenge from those criminals in a way you could not imagine!

On a critical note, as one of the well-known book reviewers in India has suggested, what Palak Kundra has tried to do as an author is something which might seem experimental yet much-needed experiment it was. She has tried not only offering the floor entirely to a female protagonist but also giving her the liberty and choice to choose her own ways of taking things to the task. As a character, Diljit does never seem to be worrying or hesitating once she is in the groove!

Giving a slightly elevated pedestal to the female characters is not a new thing in Indian fiction. Nevertheless, doing it the way Palak Kundra has done it is certainly new! Diljit does not only take revenge of the crime and injustice done against her but also leaves a message for the women of the country. She warns them of the crime and hatred out there which needs to be faced boldly rather than bearing things without making even a hissing sound. Diljit is bold enough to subdue all other characters in the novel and pursue her dream of being an actress. He achievement might be seen as a metaphorical garb which tells us that the author has, in fact, become an author now!

To conclude the review, I strongly believe that we do need more and more books like Palak Kundra's Bleeding Queens to make the society aware about the issues and also extending courage and boldness towards the women in our society. Sometimes, action is the best form of defence rather than hiding away here and there and the same is shown in this novel. You can get the novel from Amazon and enjoy reading it. The link to the novel is added below:

by - a TBB contributor
Book Reviews